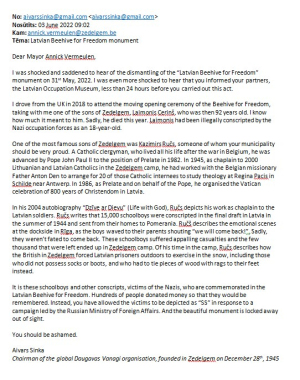 I was shocked and saddened to hear of the dismantling of the “Latvian Beehive for Freedom” monument on 31st May, 2022. I was even more shocked to hear that you informed your partners, the Latvian Occupation Museum, less than 24 hours before you carried out this act.

I drove from the UK in 2018 to attend the moving opening ceremony of the Beehive for Freedom, taking with me one of the sons of Zedelgem, Laimonis Ceriņš, who was then 92 years old. I know how much it meant to him. Sadly, he died this year. Laimonis had been illegally conscripted by the Nazi occupation forces as an 18-year-old.

One of the most famous sons of Zedelgem was Kazimirs Ručs, someone of whom your municipality should be very proud. A Catholic clergyman, who lived all his life after the war in Belgium, he was advanced by Pope John Paul II to the position of Prelate in 1982. In 1945, as chaplain to 2000 Lithuanian and Latvian Catholics in the Zedelgem camp, he had worked with the Belgian missionary Father Anton Den to arrange for 20 of those Catholic internees to study theology at Regina Pacis in Schilde near Antwerp. In 1986, as Prelate and on behalf of the Pope, he organised the Vatican celebration of 800 years of Christendom in Latvia.

In his 2004 autobiography “Dzīve ar Dievu” (Life with God), Ručs depicts his work as chaplain to the Latvian soldiers. Ručs writes that 15,000 schoolboys were conscripted in the final draft in Latvia in the summer of 1944 and sent from their homes to Pomerania. Ručš describes the emotional scenes at the dockside in Rīga, as the boys waved to their parents shouting “we will come back!”. Sadly, they weren’t fated to come back. These schoolboys suffered appalling casualties and the few thousand that were left ended up in Zedelgem camp. Of his time in the camp, Ručs describes how the British in Zedelgem forced Latvian prisoners outdoors to exercise in the snow, including those who did not possess socks or boots, and who had to tie pieces of wood with rags to their feet instead.

It is these schoolboys and other conscripts, victims of the Nazis, who are commemorated in the Latvian Beehive for Freedom. Hundreds of people donated money so that they would be remembered. Instead, you have allowed the victims to be depicted as “SS” in response to a campaign led by the Russian Ministry of Foreign Affairs. And the beautiful monument is locked away out of sight.

You should be ashamed.

Chairman of the global Daugavas Vanagi organisation, founded in Zedelgem on December 28th, 1945